Own This Product?
Leave us a Review! 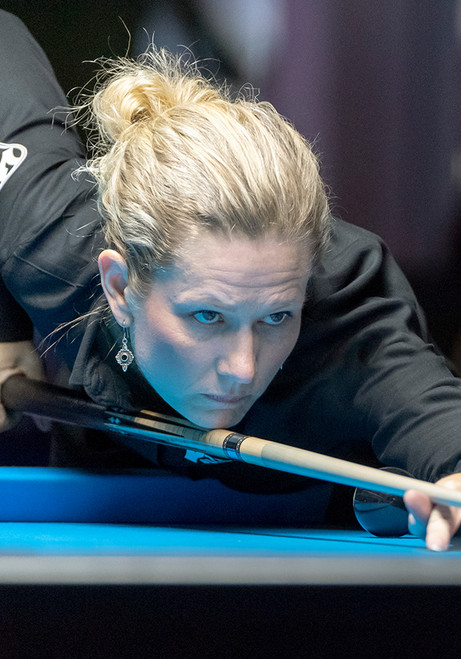 Her story: What’s unique about Angela is that she started as the average pool player. Her natural talent for the game caught the eye of Viking and we quickly picked her up adding her to our ambassador team in 1997. Sadly, she had to give up her passion for the game in 1999 to focus on her family.   Dedicating what time she could while her kids where young, she worked her way up the corporate ladder while going back to college twice graduating with an associate degree in 2004 and her bachelors in 2015 at the age of 39. She is now a full-time employee for Grainger Industrial Supply in her 11th year. Being a single mom of two teenagers, she waited until her girls were old enough to support her dream of billiards and with their support and encouragement decided to give it a another try at the age of 42. Even though she’s had limited time to devote to the game, she achieved her life-long dream of making it to the WPBA and has risen through the ranks to earn the respect of many players and organizations throughout the sport. She is known for her exceptional fundamentals and shares her knowledge by giving lessons as often as she can. She works hard for women’s billiards as a newly elected board member for the WPBA and gives back to her sponsors as much as she can to help grow and promote the sport she loves. Angela is a true ambassador for the sport, and we are proud to have her as part of our team!

Angela as a NAPA women's player has achieved an 8-ball NAPA skill level of 119, the highest female player achievement in NAPA history. Angela will attend the 2022 NAPA Super Shooters Championship in West Monroe, Louisiana in October 2022.

Started Playing with Viking Cues in: 1997
What is in Her Bag?: Now archived Viking A621, Siege shaft in 12.75mm with SIB Blue tip, Crush/Punch Combo, 11" Butt Extension
Hometown: Vincent, Ohio
Fun Fact:  She listens to heavy metal music and is addicted to coffee (black coffee with creamer, none of that fancy stuff!).
Motto: They key to happiness is laughter!